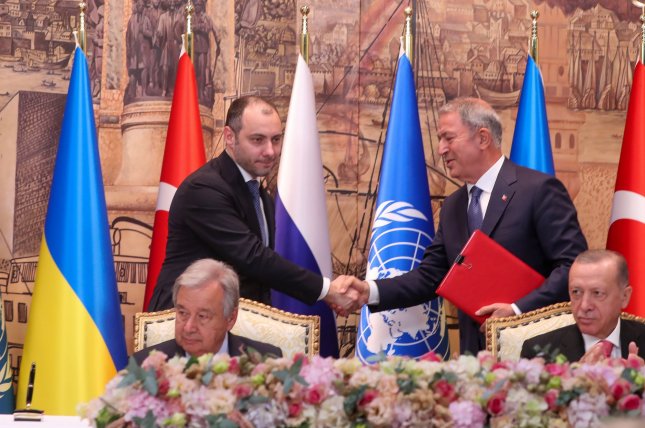 The breakthrough followed months of negotiations led by Türkiye and the United Nations and marks the first major agreement between countries since Russia launched what it calls a “special military operation” on February 24. / Gokhan Mert / Upi.com

Russia and Ukraine have signed a landmark deal with Türkiye and the United Nations that will allow the resumption of Ukrainian grain exports through the Black Sea.

Ministers from both countries each inked separate but identical agreements in Istanbul since Kyiv officials refused to put their names on the same document with Russia amid the ongoing war.

The agreement brokered by Türkiye and the United Nations on Friday guarantees the safe passage of commercial ships from Ukraine’s three key Black Sea ports – Odessa, Chernomorsk and Yuzhny – in the next few weeks.

As part of the deal, Ukrainian pilot vessels will guide grain ships through a safe corridor in the Black Sea, which is mined, and then pass through the Bosphorus Strait ­– an important shipping corridor in northwest Türkiye. The ships will be monitored by a Joint Coordination Centre (JCC), established immediately in Istanbul and include representatives from Ukraine, Russia, Türkiye and the United Nations.

The breakthrough followed months of negotiations led by Türkiye and the United Nations and marks the first major agreement between countries since Russia launched what it calls a “special military operation” on February 24.

In his remarks at the ceremony, UN Secretary-General António Guterres praised the agreement, saying that it is “the most important thing he had done in his time heading the international body.”

Turkish President Recep Tayyip Erdogan, who played a key role during months of tense negotiations, said “millions of people will be relieved of this danger of hunger” as a result of the deal.

“In the coming days we will see the start of ship traffic and many countries will have a breath of fresh air,” Erdogan said.

Ukraine, known as one of the globe’s breadbaskets, is a top grain supplier to dozens of developing countries. Last year, its grain exports totaled $12.2 billion, accounting for nearly a fifth of the country’s total exports. Prior to the war, Ukraine exported 98 percent of its cereals and oilseed via the Black Sea, at a rate of up to 6 million tonnes per month. But with the ports blocked and the railway system unable to cope with the extra volume, the country is currently only exporting between 1-1.5 million tonnes a month.

Millions of tons of wheat have been stuck in silos in the war-torn nation since the war outbreak. The inability to export grain from Ukrainian ports has led to surging food prices, as well as fears of a global food crisis.