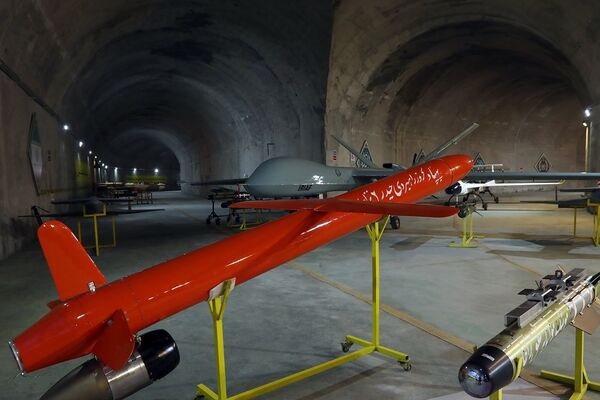 Iran unveiled the Heydar-2 cruise missile in an underground facility on 28 May, 2022. / Young Journalists Club

Chief of Staff of the Iranian Armed Forces Major General Mohammad Hossein Bagheri unveiled last week the Heydar-2, Iran’s first cruise missile that can be fired from a drone.

“The Heydar cruise missile was unveiled during the visit of Major General Mohammad Bagheri, Chief of Staff of the Armed Forces, to the 313th UAV base of the Army of the Islamic Republic of Iran,” Tasnim news agency reported on May 28.

According to the report, the missile has a range of 200 km and a speed of 1,000 km p/h at the moment of hitting the target. It can be launched from the country’s Fotros and Kaman-22 drones.

“Strategic base 313” is located several hundred meters underground under the Zagros mountain in the western Iranian province of Kermanshah. It houses about 100 drones and cruise missiles, which are based in tunnels.

After his visit to the secret drone base, General Bagheri said that achieving pre-emptive strikes against the “enemy” requires shifting from old weapons to modern ones such as drones.

“Indeed, we must consider all possible wars, case by case, as smart, precise and impartial games, not in the form of propaganda and in a one-sided way. Then, if we come to the conclusion that we need changes, we must try to create the pre-emptive capability against the enemy which is not possible by old methods and equipment and facilities. The drones I saw today can play this role very well,” he added.

For his turn, Mahmud Musavi, the Operation Deputy of the Islamic Republic of Iran Army, said that the drones stored in “secret” underground bases are mainly for extra-territorial operations.

“The missions given to these secret bases of the army are very unique and mainly extra-territorial missions. Therefore, the equipment in these bases is kept secret and should be stored away from the enemy’s eye to be used when needed,” he said.

Meanwhile, the visit comes following an explosion at a research facility at the Parchin military complex east of Tehran on May 26. The Iranian defense ministry said in a statement that one engineer was killed and another injured in the incident.

On May 27, The New York Times quoted an anonymous US official saying that “suicide drones had attacked Parchin,” but the report did not say who was behind it or provide any further details.