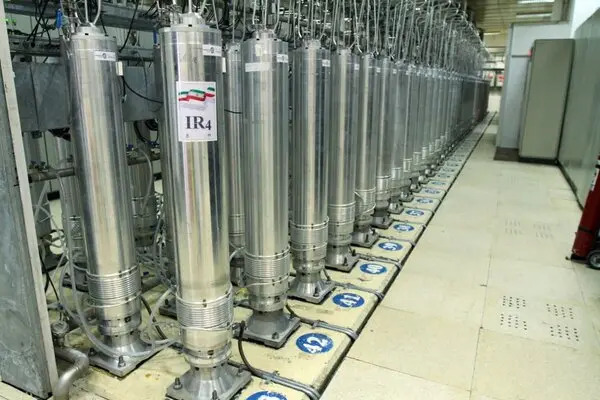 The picture shows centrifuges used to enrich uranium at Iran’s nuclear facility in Natanz in 2019. / The New York Times

The Spokesman for the Atomic Energy Organization of Iran (AEOI), Behrouz Kamalvandi, has said that an order was given to begin feeding gas into hundreds of new centrifuge machines, including IR1 and more advanced IR6.

“These centrifuges are advanced machines and this issue has already been brought to the notice of the agency,” Kamalvandi said, referring to the International Atomic Energy Agency (IAEA).

He further said that the move was in line with the implementation of the Strategic Action Plan to Lift Sanctions and Protect Iranian Nation’s Interests, a piece of legislation that was passed in 2020 by the Iranian parliament, and the country’s aim to reach an enrichment level of 190,000 separative work units (SWU).

The spokesman said that the parliament previously obliged the AEOI to begin operating 1,000 IR6 centrifuges, among other measures. According to Kamalvandi, 500 IR6 centrifuges have been installed at nuclear facilities, while their launch process will take about 10-15 days. The remaining centrifuges are underway, he added.

Meanwhile, Iran and other signatories of the 2015 nuclear deal (JCPOA) are now studying a new draft proposed by EU Foreign Policy Chief Josep Borrell for reviving the agreement in the near future.

Referring to the injection of gas into centrifuges, Iranian Foreign Minister Hossein Amir-Abdollahian said on August 2 that Iran started the injection as an act of defiance following the fresh US sanctions on entities trading in Iranian petroleum and petrochemicals.

He warned the US not to try to pressure Iran through new sanctions, saying that “let them put aside their excessive demands. We adhere to logic and negotiations and are serious about reaching a strong agreement. But if America wants to continue on its current path, we will never sit idle.”

Amir-Abdollahian described the recent US sanctions against Iran as “ineffective” and “irrational actions” masterminded by US President Joe Biden and Secretary of State Antony Blinken.

“The timing of these latest sanctions was a surprise for Iran, as Tehran had been receiving messages from the US president these days through mediators about the USA’s goodwill to return to the 2015 nuclear deal,” he said.

Meanwhile, the head of AEOI, Mohammad Eslami said on August 1 that “Iran has the technical capability to build an atomic bomb, but there is no such plan on the agenda.”

In an interview with the Fars news website, Eslami also said that his organization cooperates constructively with the IAEA and that there are no disruptions in this cooperation.

“All our capacities are being realized under the supervision of the agency based on the NPT treaty and the safeguards agreement,” he added, referring to the Treaty on the Non-Proliferation of Nuclear Weapons.

IAEA Chief Rafael Grossi said on July 22 that Iran’s nuclear program was “galloping ahead” and that the agency had very limited visibility on what was happening.

On July 31, Iran’s lead negotiator Ali Bagheri Kani voiced Tehran’s readiness to conclude the talks on reviving the 2015 nuclear deal in a short period of time, saying that Iran was working closely with the nuclear deal partners and the EU Coordinator Enrique Mora, “to give America one more chance to demonstrate its goodwill and accountability.”

According to Mohammad Eslami, work will begin in the coming weeks to construct a research reactor at Isfahan’s Uranium Conversion Facility. He said on July 27 that the production of nuclear fuel at the Isfahan facility was one of AEOI’s programs that would enable Iran to join the ranks of clean fuel manufacturers in the world.

Referring to the Iranian power plants, Eslami said that one power plant had already been built to produce 1,000 MW and another was under construction. According to him, it would produce 2,000 MW, with the organization’s goal to increase this figure to 10,000 MW.

Since April 2021, Iran and world powers have engaged in negotiations in Vienna to revive the deal that had fallen apart after the US withdrawal in 2018. However, the talks have been stalled since March 2022. In June 2022, Qatar hosted the EU-mediated indirect talks between Iran and the USA, but they ended without progress.