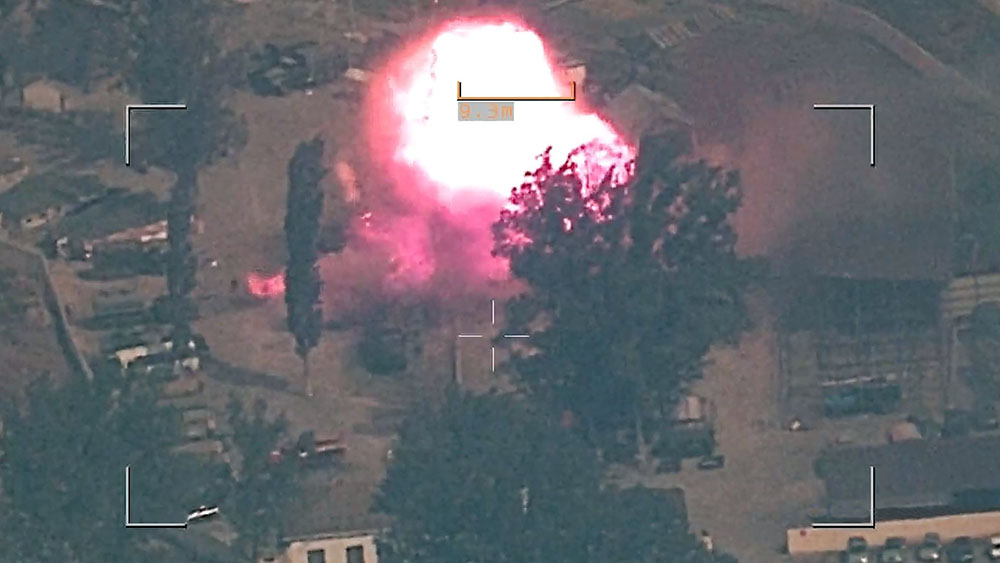 A moment of the explosion of an Armenian ammunition depot as a result of attacks of the Azerbaijani army during the retaliatory operation "Revenge", August 3, 2022 / Azerbaijan Defense Ministry

According to Azerbaijan’s Defense Ministry, the illegal Armenian armed formations in the certain parts of Azerbaijan's Karabakh (Garabagh) region, where the Russian peacekeeping contingent is temporarily deployed, committed a terrorist and sabotage act against the Azerbaijan Army, killing serviceman Anar Kazimov. In addition, members of illegal Armenian armed detachments attempted to seize the Girkhgiz high ground, located on a mountain range covering the territory of the Kalbajar and Lachin regions, and establish new combat positions there.

“As a result of the “Revenge” retaliatory operation conducted by the Azerbaijan Army Units, the Girkhgiz high ground, including Saribaba and several advantageous high grounds along the Karabakh range of the Lesser Caucasus Mountains were taken under control,” the ministry said in a statement.

Azerbaijan’s army units are now carrying out engineering work to establish new positions and laying supply roads on advantageous frontiers, according to the ministry.

The ministry also reported that several combat positions of illegal Armenian armed detachments were destroyed during the operation, and an airstrike was inflicted on a military unit stationed in the Yukhari Oratagh settlement of the former Aghdara region.

“As a result, the manpower of illegal Armenian detachments was annihilated and wounded, as well as several D-30 howitzers, military vehicles and a large amount of ammunition were destroyed.”

The ministry declared that following the Constitution of Azerbaijan, any terror and provocation committed in the sovereign territories of the country will be resolutely prevented, and warned that countermeasures will be even more crushing.

The minister added that contrary to the obligations arising from the tripartite statement of November 10, 2020, so far the Armenian armed forces and illegal Armenian armed groups have not been completely withdrawn from Azerbaijani territories, which is unacceptable. According to Bayramov, Armenia’s failure to fulfill its obligations is the main cause of tension in the region.

Armenia and Azerbaijan had been locked in one of the world’s most protracted conflicts for nearly three decades. In 1991, Armenia launched a full-blown military campaign against Azerbaijan, which lasted until a ceasefire in 1994 and saw Armenia occupying 20 percent of Azerbaijan’s internationally recognized territories. Over 30,000 Azerbaijanis were killed, and one million were expelled from those lands in a brutal ethnic cleansing policy conducted by Armenia.

On September 27, 2020, the decades-old conflict between Armenia and Azerbaijan spiraled after Armenia’s forces deployed in the occupied Azerbaijani lands shelled military positions and civilian settlements of Azerbaijan. During the counter-attack operations that lasted 44 days, Azerbaijani forces liberated over 300 settlements, including the cities of Jabrayil, Fuzuli, Zangilan, Gubadli, and Shusha, from nearly 30-year-long illegal Armenian occupation. The war ended in a tripartite statement signed on November 10, 2020, by Armenia, Azerbaijan, and Russia. Under the statement, Armenia also returned the occupied Aghdam, Kalbajar, and Lachin districts to Azerbaijan.

The document also ordered the deployment of the Russian peacekeepers to the area and the complete withdrawal of the Armenian armed forces from the Azerbaijani territories.

However, Armenia’s authorities have failed to deliver on their commitments despite the relevant calls of the Azerbaijani authorities. The Armenian armed detachments are seen operating illegally in the Azerbaijani territories where the Russian peacekeeping mission is temporarily deployed.

The illegal armed gangs have been regularly firing at the positions of the Azerbaijani army and have repeatedly resorted to armed provocations, terror activities, and infiltration attempts. In addition, they have carried out engineering and fortification work, trying to build new positions, as well as digging trenches, and creating a military zone.