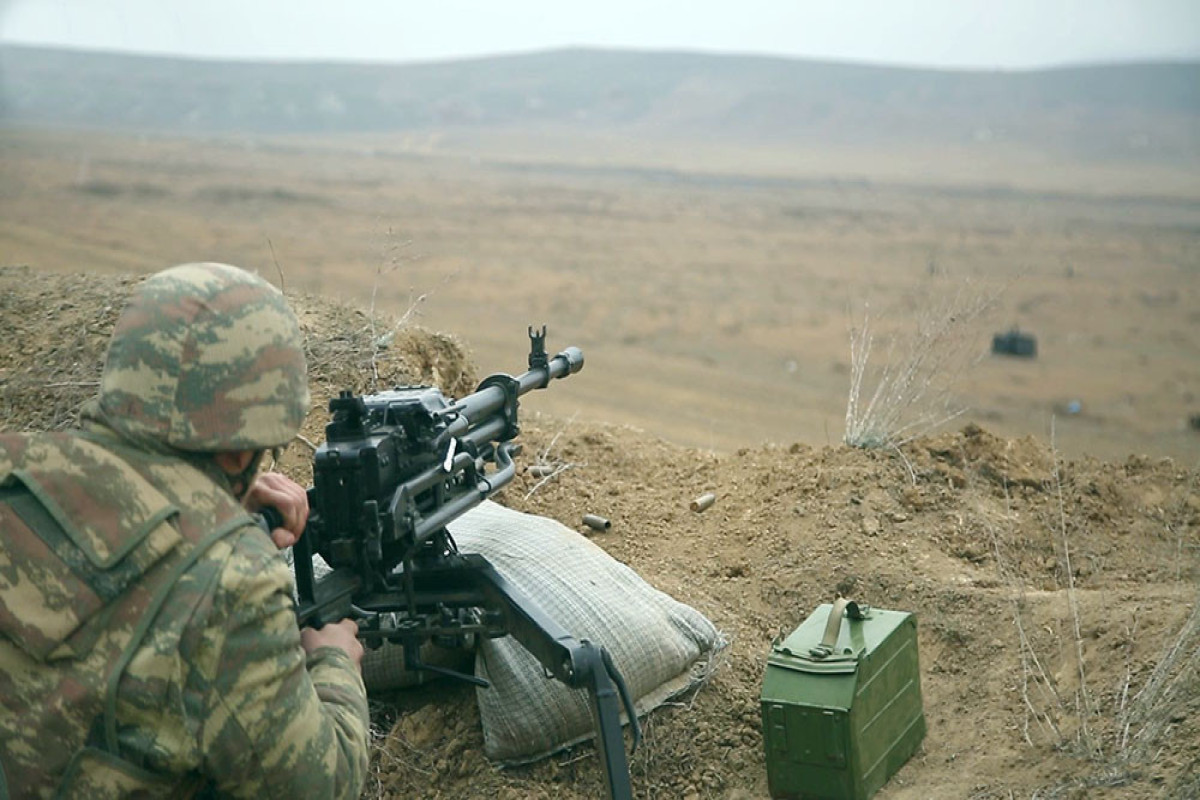 The positions of the Azerbaijani Army have once again been targeted by the Armenian armed formations amidst the ongoing political dialogue aimed at securing durable peace between Azerbaijan and Armenia.

According to Azerbaijan’s Defense Ministry, a total of nine armed provocations against the Azerbaijani military occurred on Tuesday. Two incidents were recorded as the Armenian armed forces shelled the Azerbaijani positions along the state border between the two countries. Seven other attacks were carried out by the illegal Armenian armed gangs in Azerbaijan’s Terter, Aghdam, Khojavand, and Khojaly districts.

Two of these districts - Khojavand and Khojaly - are currently in the area temporarily monitored by the Russian peacekeeping contingent, who should clear the territory from illegal armed formations and prevent such incidents.

Meanwhile, the Armenian armed provocations were suppressed by the Azerbaijani forces in adequate retaliatory measures.

President Ilham Aliyev has recently said that the withdrawal of the Armenian troops from Azerbaijan's Karabakh (Garabagh) region remained unresolved despite the fact that this is stated in the tripartite statement signed by Azerbaijan, Armenia, and Russia on November 10, 2020. Article 4 of the document requires the withdrawal of the Armenian armed formations from Azerbaijan’s territories simultaneously with the deployment of the Russian peacekeeping mission.

President Aliyev noted that Baku had repeatedly raised this issue with the Armenian side and the Russian military leadership, but Armenia was delaying the resolution of the issue. According to the Azerbaijani president, a high-ranking official of the Russian Defense Ministry promised that Armenian armed forces would withdraw from the Azerbaijani territories by June 2022, but Russia’s peacekeeping contingent has not been forcing Armenia to do it.

“Of course, this is an intolerable situation because it is completely unacceptable for Armenian armed forces to remain on the territory of Azerbaijan. [...] If Armenia does not intend to withdraw its armed forces from the territory of Azerbaijan, then it should let us know this in clear terms, and we will consider our further actions,” President Aliyev said in a government meeting earlier this month.

At the same time, officials from Azerbaijan and Armenia are currently working to address the unresolved issues between the sides, including border delimitation and mutual recognition of territorial integrities. In April 2022, the foreign ministers of the two countries held two consecutive phone talks to discuss the issues on the bilateral agenda.

On July 16, the ministers held a face-to-face meeting in Georgia’s capital Tbilisi. Azerbaijan’s Foreign Minister Jeyhun Bayramov has then said that all efforts should be aimed at achieving progress in regulating interstate relations between Azerbaijan and Armenia on the basis of post-conflict realities that emerged after the resolution of the armed conflict between the two states.

He also highlighted the significance of fulfilling all provisions agreed upon in the tripartite statements, in particular, the withdrawal of the Armenian armed forces from the territory of Azerbaijan.

Armenia and Azerbaijan had been locked in one of the world’s most protracted conflicts for nearly three decades. In 1991, Armenia launched a full-blown military campaign against Azerbaijan, which lasted until a ceasefire in 1994 and saw Armenia occupying 20 percent of Azerbaijan’s internationally recognized territories. Over 30,000 Azerbaijanis were killed, and one million were expelled from those lands in a brutal ethnic cleansing policy conducted by Armenia.

On September 27, 2020, the decades-old conflict between Armenia and Azerbaijan spiraled after Armenia’s forces deployed in the occupied Azerbaijani lands shelled military positions and civilian settlements of Azerbaijan. During the counter-attack operations that lasted 44 days, Azerbaijani forces liberated over 300 settlements, including the cities of Jabrayil, Fuzuli, Zangilan, Gubadli, and Shusha, from nearly 30-year-long illegal Armenian occupation. The war ended in a tripartite statement signed on November 10, 2020, by Armenia, Azerbaijan, and Russia. Under the statement, Armenia also returned the occupied Aghdam, Kalbajar, and Lachin districts to Azerbaijan.

However, the peace in the region remains fragile due to the provocations of the illegal Armenian armed groups. Since November 2020, Armenian armed groups resorted to numerous armed provocations against the Azerbaijani military posts. Just days after the ceasefire came into force, Armenian detachments hiding in the forests around the Khojavand district of Azerbaijan committed two deadly attacks, killing four Azerbaijani servicemen and a civilian.

In November 2021, a group of people led by an ethnic Armenian, Norayr Mirzoyan, threw an RGD-5 anti-personnel fragmentation grenade at the servicemen of the Azerbaijan Armed Forces and Russian peacekeepers stationed in the area near the Dashalti village of Shusha city. As a result of the incident motivated by “ethnic hatred,” three Azerbaijani servicemen received various degrees of injuries. Mirzoyan was captured by the Russian peacekeepers on the spot and was reportedly released without being sued.